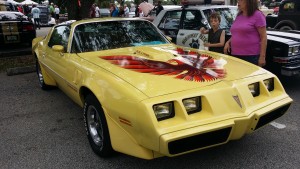 The Trans Am was a specialty package for the Firebird, typically upgrading handling, suspension, and horsepower, as well as minor appearance modifications such as exclusive hoods, spoilers, fog lights and wheels. In using the name Trans Am, a registered trademark, GM agreed to pay $5 per car sold to the SCCA.[20] Four distinct generations were produced between 1969 and 2002. These cars were built on the F-body platform, which was also shared by the Chevrolet Camaro. Despite its name, the Trans Am was not initially used in the Trans Am Series, as its smallest engine exceeded the SCCA’s five liter displacement limit.

The Trans Am GTA (Gran Turismo Americano) was an options package available on the Firebird Trans Am which added gold 16-inch diamond-spoke alloy wheels, a mono-chromatic paint scheme and special cloisonné GTA badges. The GTA (along with the Formula model that was intended to fill the gap between the base model Firebird and mid-level Trans Am) was the brainchild of former Pontiac marketing manager Lou Wassel. It was intended to be the “ultimate” Trans Am and was the most expensive Firebird available. The GTA equipment package officially went on sale in 1987 and avoided a gas-guzzler tax thanks to its lightweight PW 16-inch gold cross-lace wheels. The high-performance WS6 suspension package was also re-tuned to offer a more compliant ride while still maintaining tight handling characteristics. Engine choices consisted of a L98 5.7 liter (350 ci) TPI (Tuned Port Injection) V8 mated to GM’s corporate 700R4 automatic transmission or the 5.0 liter (305 ci) TPI V8. A five-speed manual was available but was mated to the 5.0 liter only. The GTA trim level was available from 1987 through the 1992 model year.